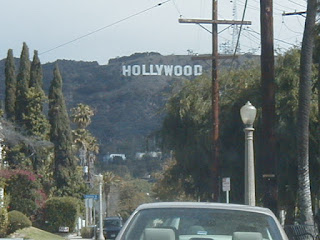 Michael and I woke our first day in California hearing a woman screaming into her cell phone “I’m in Hollywood! I’m in Hollywood!” And who could blame her? This corner of Los Angeles represents decades of American dreams—a mythology about stardom and possibility that is part of our cultural identity. 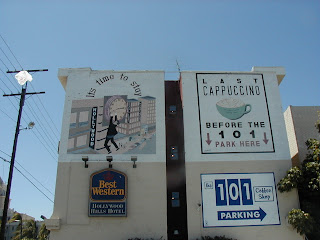 At the Best Western Hollywood Hills, we shared our room with the Rat Pack and gangsters such as George Raft and Robert DeNiro: Framed photos and engraved signatures adorned our room. A tribute to the “I Love Lucy Show” sat, appropriately, above our TV while Gable looked loving at Lombard in another. 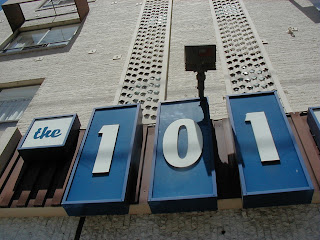 Populated by rockers, tourists and “Let’s Make a Deal” contestants, the motel’s 101 Coffee Shop offered savory diner fare such as malteds and burgers as well as sophisticated veggie meals. There was nothing like eating breakfast at 7:30 a.m. to “Rebel Yell” blaring over the loudspeaker and being served by Ashlee Simpson look-a-likes. 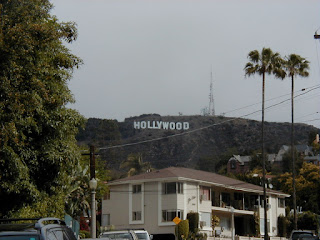 Around us, people in hushed tones promoted deals from recordings and auditions to screenplays and potential TV programs. And that was the creative energy of LA—this belief that you can make something happen, possibly something big happen—maybe something as looming as the Hollywood sign. 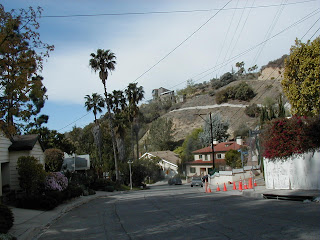 We took off up Beachwood Drive for our own pilgrimage to view it. Small apartment buildings gave way to more impressive cottages in every architectural style tucked close to one another on the winding upward path. The big white letters loomed larger and larger until we took a turn and found ourselves at a dead end. Something about the closer you get to Hollywood, the more it disappears.

A friend says he knows a big producer whose terrace overlooks the “O”. 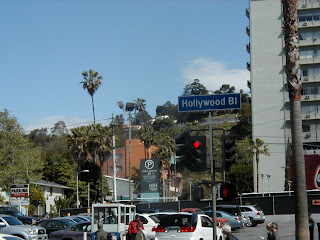 On Hollywood Boulevard, small tanning, massage and other tired storefronts dot the street with huge movie theaters now boarded over. 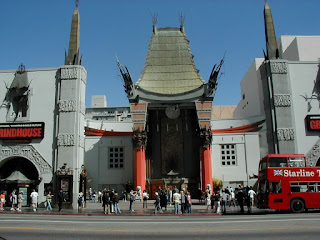 Nevertheless, crowds cluster at Grauman’s Chinese Theater with its squares of celebrity signatures, hand- and foot-prints. 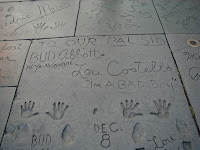 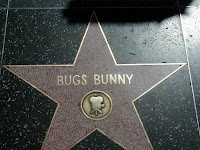 The Walk of Fame features familiar and not-so-familiar names in the sidewalk up and down the Boulevard. We just missed seeing Forest Whitaker receive his star.... 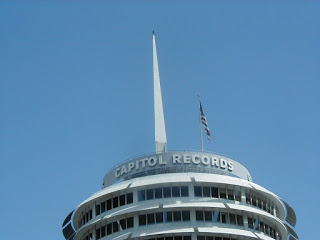 At the Capitol Records building, built to look like a stack of 45s, we couldn’t enter the lobby but peered through the glass windows at walls of solid gold and platinum records. 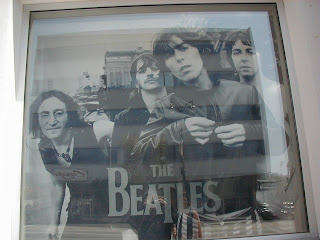 The doorman recommended lunch at Joseph’s Café, a middle-eastern restaurant at Yucca and Ivar Streets, “where all the industry people go,” and we did see the singer Brandy there. 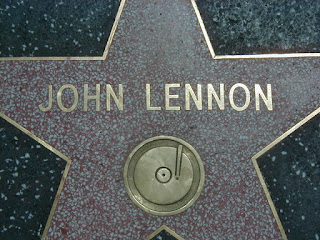 With Capitol the Beatles’ first label, John Lennon’s star is outside the building.
We drove the Sunset Strip, noting Whiskey-a-Go-Go, the Cat Club and the Viper Room, where River Phoenix overdosed—and Chateau Marmont where Belushi met his end. Given the murals and paintings of dead stars under bridges and on walls—paintings always slightly inexact—Hollywood has a bit of a mortuary feel to it. 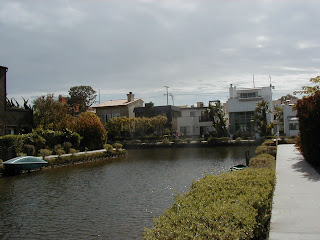 At Venice Beach, we found there really is a “Muscle Beach” where people work out beside the shore on large weight machines. And friends introduced us to the Venice Canals, an idealized community of tiny homes edging beautiful canals. I noticed no one seemed to be home—and that’s probably because everyone was out driving the freeways which always seemed to be crowded—even on Sundays. 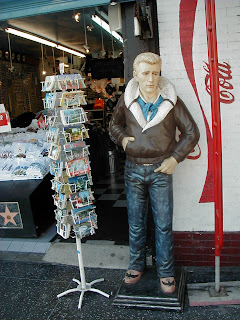 In LA, people are always seeing celebrities and talking about those experiences. Joseph Campbell once said that movie stars are like gods—they assume huge proportions on the screen, and then when we see them in real life, it’s as if we see Venus shopping at a local market, or Zeus going into a bistro. Such divine visitation in this city is an everyday occurrence, this magic that fuels creative ambition—in hushed tones—at the 101 and seemingly everywhere.