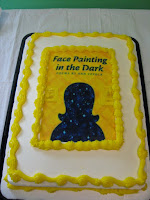 What a beautiful day at the Hudson River Museum!  In the museum’s state-of-the art planetarium, I read poems from Face Painting in the Dark (Dos Madres Press, 2014), with spectacular astro images from Doug Baum, the Hubble and others.  Prior to the reading, planetarium manager Marc Taylor lit up the dome with objects mentioned in my work.

Afterwards, at a champagne reception overlooking the river, I celebrated with artist Deborah Coulter; poets Myrna Goodman, Ruth Handel, Natalie Safir, and Maxine Silverman; musicians Michael Cefola and Larry Schwartzman; photographers Michael Booth (his photos here), Margaret Fox, and Randy Briggs; and writers Jeanette Briggs, Barbara Dickinson, Herb Hadad, Elaine Nole, Michelle Rawlick, and Sarah Bracey White, among many other cherished friends.
Stew Leonard’s cake proved my book’s cover design by Gig Wailgum is as delicious as it is attractive! Thanks to dear friend Carol Booth for acting as maître d’, to Michael Booth and Randy Briggs for taking photos, and to museum staff for treating us like Vanderbilts.

The reviews are in…

Lyle Cataring in Blotterature, Rachel Adams in Lines and Stars, Ann Wehrman in The Pedestal; and, in case you missed first reviews, Mary McCray in Big Bang Poetry, Ron Butlin in The Herald Scotland, and Beth Gersh-Nesic in New York Arts Exchange.

“Dance in the City,” appears in the current Ekphrasis, and “Miss Deepfreeze 1953” in Cahoodaloodaling.  Blotterature features an interview in addition to review.  The St. Petersburg Review will publish my translation of section 9 from Le Héros (Flammarion, 2008) by Hélène Sanguinetti.  The entire book translation has now been published!

Don’t miss Little Games Saturday, May 9, at the Eastchester Inn at 9 p.m. The band plays early Yardbirds, Animals and Who, as well as Eric Clapton, Peter Green’s Fleetwood Mac, and Gary Moore. Fronted by my husband, guitarist and vocalist Michael Cefola, the band features drummer Tommy Vinton, guitarist and vocalist John Amato, and bassist Larry Schwartzman.  Can’t make it? Catch them at the Hudson Room, May 29, at 10 p.m.

Jeff Beck at the Capitol Theater

Holding Fast to the Tree of Life

This spirited concert Sunday celebrated Temple Beth Shalom’s 50 years in Hastings.  The temple choir, which includes the talented Carol Booth, sang everything from psalms in Hebrew to tunes from composers such as Gershwin and Bernstein.  I was especially delighted to hear selections from Darius Milhaud, a professor with students such as Dave Brubeck and Burt Bacharach, performed by pianist Cheryl Seltzer, a former student, and violinist Sylvia Volpe, among the many pleasures of the evening.

Staring Back: The Creation and Legacy of Picasso's Demoiselles  d'Avignon at the Fleming Museum of Art, Burlington, through June 21, features Picasso's Les Demoiselles d'Avignon in interactive digital and traditional visual art.  Highly recommended by our resident curator, Beth Gersh-Nesic.

Scott Nammacher will be exhibiting his exceptional astrophotographs (printed on an aluminum medium) May 23 - July 5 at the Pound Ridge Library, with opening reception Saturday, May 23, 3 - 5 p.m.  Interested in the night sky?  See convenient, local events offered by the Westchester Amateur Astronomers. 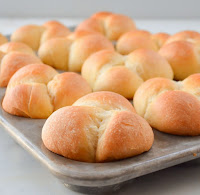 The easiest roll recipe I’ve come across has that yeasty taste of authentic bread my mother would make on special occasions.  Here’s bread-making that can be done within 90 minutes:

Thanks and/or congratulations to:

Deborah Coulter, artist, for her original art “skins,” available for your digital devices

Gary Glauber, poet, on writing 30 poems in 30 days for PoMoSco

Peggy Harrington, for sharing her essay, “Tucker,” which appeared in The East Hampton Star

Anne James, Zymbol editor, for reaching her Kickstarter goal to fund her journal

Tony LoBianco, actor, for bringing “Little Flower” this month to Italy to entertain our troops

Linda Simone, poet and artist, for an intimate look at Frida Kahlo and Amy Schumer’s take-down of Hollywood sexism

Frank Vitale, filmmaker, for sharing episodes 14 -17 of The Metropolis Organism

I end this newsletter with a tale.  Once upon a time, a second-grade teacher sent home a note to her student’s mother.  The mother unfolded the paper.  It said, “Your daughter speaks in poetry.”  Amazed, she put the paper away and kept it in her heart.  She said nothing but, at every opportunity, supported and cheered her daughter in any artistic or literary achievement.  As time went by, that girl became a woman, and that woman a poet.  How she became a poet felt like a delicious mystery, and yet the most right thing in the world.  I know because I am that poet.  The insightful woman who nurtured my poetic inclination left us last month at the age of 90.  As bereft as I am, I still have my poetry, in many respects, thanks to her.

Posted by annogram at 1:23 PM No comments: