New York before the storm

If you’re in the tri-state, you’re probably home—waiting for it. In Manhatttan today, many commuters stayed away, the late afternoon rush toward Grand Central noticeably thin. On the train, people pensive, the word “noon” slipping in conversation—the time tomorrow when NYC will, in an unprecedented move, shut down all transportation systems. In the suburbs tonight, it’s eerily quiet except for August cicadas. Hurricane Irene, the size of Europe, swirls like the plot of a bad sci-fi film. Enjoy this special hurricane edition while you still have electricity! Postscript: We survived without too much damage--kudos to our elected officials for handling Irene so well! 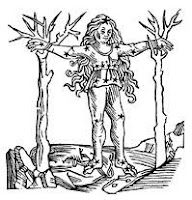 After my last newsletter, many annogrammers asked where to purchase my poetry chapbook, St. Agnes, Pink-Slipped. It’s easy – order it online at the Kattywompus Press Book Store. I’m also grateful to Sarah Lawrence College for announcing the publication on the alumni website (scroll down). In addition, I’m thrilled that The Widows' Handbook, an anthology that received more than 500 submissions, has accepted my poems, "Irradiation" and "What Yields to Winter.”

Congratulations to Sarah Bracey White, who has been selected by CavanKerry as one of its “New Voices” for 2012. Her memoir, Primary Lessons, recalls her mother’s wisdom that safely guided Sarah through her first 12 years in the Jim Crow south. Publisher Florenz Eisman says, “It’s a delight to welcome Sarah as a new CavanKerry writer.” 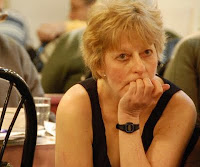 I am lucky that Jackie Sheeler introduced me to Cindy Hochman, a versatile literary artist if ever I met one! Her new chapbook, The Carcinogenic Bride, is as riveting as the best Ginsberg or Sexton poems you know. She is also co-host of cable TV’s Poetry Thin Air, where she interviews poets such as Pedestal Magazine founder and editor John Amen. In addition, she is editor-in-chief of First Literary Review East, and welcomes poetry submissions under 16 lines.

Wald and Trede book launch bonanza
I am so happy for Catherine Wald, who will launch Distant, burned out stars (Finishing Line Press) on Saturday, September 9 at 4 p.m. at the Amawalk Friends Meeting House, 2467 Quaker Church Road, in Yorktown. Equally exciting—the launch of Field Theory (Texas A&M University Press) by poet and Toad Lily Press publisher Meredith Trede on Sunday, October 23 at 2 p.m. at the JCC on the Hudson in Tarrytown. I’ve read both books and they are worthy of much celebration!

will unveil the newly restored 9/11 Memorial Wall on Sunday, September 11, at 10:00 a.m. at Presser Park, Hartsdale. Composed of tiles designed by school children and county residents, the wall had fallen into disrepair in recent years. Thanks to a donation from Sam’s Club and the tireless efforts of Greenburgh Arts & Culture Director Sarah Bracey White, the wall will once again honor the memory of Greenburgh residents who died that September day 10 years ago.

'Round the Net
Thanks to the following people who have sent or inspired these fun and fantastic links:

· Jamie Appel for the wry Moxy Fruvous song,"My Baby Loves a Bunch of Authors."
· Jim Cunningham for reminding us how wonderful his Vermont hardwood pens are.
· Poet and novelist Terry Dugan for this call for personal essays and stories on late-bloomer artists (latebloomeranthology@gmail.com).
· Romance novelist Diane Gaston for the release of Valiant Soldier, Beautiful Enemy. final installment in the Three Soldiers Series, which can be ordered through an online vendor.

Philip Levine on becoming our new Poet Laureate.
Kevin Pilkington on winning the 2011 New York Book Festival Award in Poetry for In the Eyes of a Dog (New York Quarterly Books).
· Novelist-screenwriter David Ring for letting me know what happened to the Ruth Lily $21 million.
· Poet Terry Dugan for this hilarious news item on National Bad Poetry Day.
· Workplace violence expert Kim Wells for the wonderful jewelry at that donates 10 percent of proceeds to the National Domestic Violence Hotline.
· White Pine Press for the head’s up on its discounted translation collection for sale.

so go ahead, worship the mountains as they dissolve in dust,
wait on the wind, catch a scent of salt, call it our life.

We don’t see the ocean, not ever, but in July and August
when the worst heat seems to rise from the hard clay
of this valley, you could be walking through a fig orchard
when suddenly the wind cools and for a moment
you get a whiff of salt, and in that moment you can almost
believe something is waiting beyond the Pacheco Pass,
something massive, irrational, and so powerful even
the mountains that rise east of here have no word for it.

You probably think I’m nuts saying the mountains
have no word for ocean, but if you live here
you begin to believe they know everything.
They maintain that huge silence we think of as divine,
a silence that grows in autumn when snow falls
slowly between the pines and the wind dies
to less than a whisper and you can barely catch
your breath because you’re thrilled and terrified.

You have to remember this isn’t your land.
It belongs to no one, like the sea you once lived beside
and thought was yours. Remember the small boats
that bobbed out as the waves rode in, and the men
who carved a living from it only to find themselves
carved down to nothing. Now you say this is home,
so go ahead, worship the mountains as they dissolve in dust,
wait on the wind, catch a scent of salt, call it our life.

Posted by annogram at 7:21 PM No comments: