The trees are already turning red in New England—and like those leaves, Labor Day signals the end of summer. We spent the last week in Vermont, eating maple walnut ice cream and taking long drives through small towns. This annogram veers first into a travelogue, then snaps back to it literary origins—with a list of fabulous events that make the fall so energizing.

Funky fun Bellows Falls
While The New York Times recently profiled Bellows Falls, Vermont as a quirky community of emerging artists and entrepreneurs—we’ve already known about this classic New England industrial town for a long time. Replete with brick clock tower, train station and canal, Bellows Falls is a charming slice of Vermont, undiscovered by out-of-staters who usually head for Bennington, Manchester and sights along Route 7. Fav places in town:

First, some of the oldest petroglyphs, i.e., cave drawings, can be found carved into rocks on the Bellows Falls side of the Connecticut River. Some intrepid soul painted their lines yellow years ago, so they look a little like early smiley faces. People come from all over the world to view these authentic carvings. Okay, enough anthropology—let’s get to the food!

Another great meal stop is “the wurst place in Bellows Falls,” a.k.a.

Fat Franks. Jim, owner of Fat Franks, takes pride in offering three sizes of hot dogs, chili dogs, superb beans and a delectable veggie burger that’s actually made out of vegetables and not textured soy protein. Fat Franks has an upstairs dining area, or opt for take-out if you’d like to picnic somewhere.

If you’re a New Yorker hungry for authentic Italian cuisine, plan on Boccelli’s on the Canal. Chef/owner Sharon grew up in Boston’s North End and learned cooking secrets from her Italian grandmother and mother. While the atmosphere is casual, the food is extraordinarily high-end—fresh pasta, vegetables and huge slices of artisan bread roasted with olive oil. 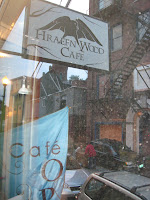 For a quiet moment looking over Bellow Falls’ canal, head to the Hraefnwood (pronounced “Ravenwood”) Café (23 Canal St., 802-299-7429). Decorated with teal satin drapes and a fabulous art-deco mural hand-painted by café owner Kirsten Jette, Hraefnwood is atmospheric and serene. Kirsten and husband Eric studied with master tea- and coffee-makers to learn how to make extraordinary chai lattes and cappuccinos—and they also offer quality fare such as hot paninis or homemade baked goods. 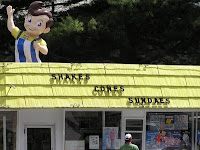 Somehow ice cream tastes better in New England—and Dari Joy is no exception! The 32 flavors and huge portions at this former hamburger drive-in in Bellows Falls are a great way to top off any meal. People come over the bridge from New Hampshire to indulge here. If you enjoyed this tour through Bellows Falls, let me know and I can write next time about more Vermont treasures. 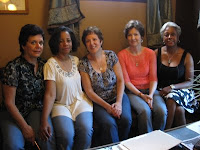 Sapphires at Hraefnwood
And what a pleasure it was to read at the Hraefnwood Café! Angela Batchelor, Sarah Bracey White, Terry Dugan, Linda Simone and I enjoyed meeting Kirsten and Eric, Hraefnwood proprietors and hosts of their popular music and poetry series. The evening felt less like a performance more like a party hosted by the Jettes. For a full description and photos of the evening, visit the new Sapphire blog. 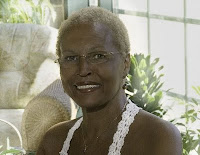 Brenda Connor-Bey to be honored
Congratulations to Greenburgh Poet Laureate Brenda Connor-Bey, who will be honored at the Hudson Valley Writers Center at the center’s 20th anniversary gala on September 20. Brenda is a much loved writing and award-winning teacher, playwright and poet. Donald Stever, co-founder of the center, and writer Ben Cheever, equally respected, will be honored too. For tickets to the gala or to purchase space in the program, go to the HVWC site. (link)

The Literary Traveler
Ever wish you could have literary insight into the country you’re visiting? Now you can, with the Whereabouts Press Travelers Literary Companion series. The Mexico anthology, edited by literary translator CM Mayo, contains excerpts of several major Mexican works, including some by Rosario Castellanos, Carlos Fuentes and Fernando del Paso. Newer versions represent China, Japan, Ireland and Vietnam.

Free readings at Riverspace in Nyack 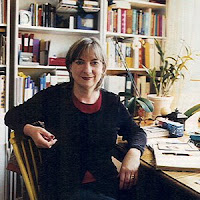 Poet Julie Agoos, winner of Yale Younger Poets Prize, has been called "quietly lyrical to the point of radiance" by The Washington Post. Julie will be reading with Molly Peacock (right) on September 14 at 4pm at Riverspace, a new community art center offering innovative programming in theatre, music, film, dance and poetry, at 119 Main Street in Nyack. On October 26, at 4pm, Riverspace will also welcome poets Teresa Carter, author of Elegy for the Floater, and Joan Cusack Handler, author of The Red Canoe.

'Round the Net
First, welcome to our new US Poet Laureate, Kay Ryan and thanks to friends for the following links:

- Sarah Bracey White for her wonder-filled fable, "The Wanderlust" in the Women and Voodoo issue of Women Writers

Elizabeth Alexander at Manhattanville
Poet Elizabeth Alexander will read at Manhattanville on October 7, 7pm. She is the author of four books of poems, The Venus Hottentot, Body of Life, Antebellum Dream Book, and American Sublime, a finalist for the 2005 Pulitzer Prize. A scholar of African-American literature and culture, she also published a collection of essays, The Black Interior. She is a recipient of numerous awards including the 2007 Jackson Prize for Poetry awarded by Poets & Writers.

And cool master classes
Master classes allow non-matriculated adults to get the best from successful writers. Novelist Martha Cooley will teach “What Fiction Writers Can Learn From Poets,” on October 18, from 10am -4pm, at Manhattanville. The $125 fee includes lunch. On September 20, learn the art of “Sports Journalism: From Print to Internet to Electronic Media,” taught from Barry Wilner, who has authored 24 books. The cost is $50. For more information, or to register, call (914) 323-5300.

Book reviews
In The Kingdom of Ordinary Time (W.W. Norton, 2008), Marie Howe does what she does best: Uncover profound spiritual truths in everyday life—salted with a dose of humor. In “Reading Ovid,” she writes

The thing about those Greeks and Romans is that
at least mythologically,

they could get mad. If the man broke your heart, if he
fucked your sister speechless

then the real true hell broke loose:
“You know that stew you just ate for dinner, honey?—

It was your son.”
that’s Ovid for you.

Ms. Howe uses her acute ear for found dialogue and her own spiritual questioning to tackle subjects such as marriage and child-raising—with poems frequently anchored in the Gospel. This unusual mixture of work somehow feels seamless in her hands, and delightful in ours.

“I’ll be right back,” Tao Lin says heart-breakingly at the end of many poems in Cognitive Behavioral Therapy (Melville House, 2008). Each one, often crafted as an e-mail message, examines the emotional underbelly of the Internet—isolation from others, and in the speaker’s case, disassociation from himself. The speaker is a sometime shoplifter, missing an imagined or real girlfriend across broadband space. When the poet changes characters into hamsters, the metamorphosis reinforces what the Internet can turn us into—nervous, self-interested, scavenging. I could not put this book down, and found it the first poetry to accurately portray the psychic price of our much acclaimed Internet era. The narrator says that if you look into his mind, you find “a powerful sadness.” That is the feeling that lingered after I read this original and disturbing work.

Brenda Is in The Room and Other Poems (Colorado State, 2007) by Craig Morton Teicher won the Colorado Prize for Poetry. I almost didn’t read this book given its title and floor plan of rooms as a metaphor for marriage—you could hear me groaning, “Oh gawd!” But the title poem is engaging, so I persevered. I enjoyed the cosmic rant of “I Am A Poet,” fairy tale “One to Another: A Creation Myth” and sensuous tribute to his fiancée, “I Am a Woman’s Lover”:

Whatever animal I was before, now
I am twice that animal. She is more
a man than I will ever be. The space
between us is an uncrossable ocean.
And each time we find a way across,
we only arrive in another country
where another language is spoken.
The wild horses in our field fix me
in their narrow gaze, preparing to charge,
bending low so my beloved can mount.

As we head toward fall, I recall the words of Sylvia Plath, who pondered a mid-life career she was never to have—but can inspire the rest of us to fulfill:

I feel a helplessness when I think of my writing being nothing, coming to nothing: for I have no other job—not teaching, nor publishing. And a guilt grows in me to have all my time my own.... I walked in the vegetable garden, beans hanging on the bushes, squash, yellow and orange, fattening in the dapple of leaves, corn, grapes purpling on the vine, parsley, rhubarb. And wondered where the solid, confident purposeful days of my youth vanished. How shall I come into the right, rich full-fruited world of middle-age. Unless I work. And get rid of the accusing, never-satisfied gods who surround me like a crown of thorns. Forget myself, myself. Become a vehicle of the world, a tongue, a voice.

Posted by annogram at 1:46 PM No comments: