What I love about fall is the infusion of poetry events—come see me read at the Bowery Poetry Club this coming Saturday, September 26, at 2 p.m. with poets from the anthology, Not a Muse (Haven Books, 2009). Mark your calendar also for October 30 at 6 p.m.—when I’ll be the featured poet at Jackie Sheeler’s Son of Pony Series at the Cornelia Street Café. 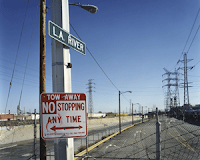 Poet Guy Bennett and biographer Béatrice Mousli have created “ABC LA: Portrait of a City” to air Sunday, September 27, at 2 p.m. L.A. Time on France Culture. Check France Culture for NYC times; or to listen to or podcast ABC L.A. the week following the broadcast.

Mindmade Books’ latest entry
Guy also recommends Sticks by Stephanie Rioux, part of Mindmade Books’ 2009 series, which includes work by Dawn Michelle Baude, David Lloyd, and Raymond Queneau. He calls Rioux’s poems “lyrical snippets ranging in length from one word to four slim lines, form a suggestive, open-ended text that reduces the world and its quotidian splendor to bits and pieces.” Purchase it and other titles at Mindmade Books.

Let the Poets Speak
A reception celebrating winners and finalists in the Town of Greenburgh’s 2009 Poetry Contest will take place Sunday, October 4, 2-4 p.m. at the Greenburgh Town Hall. The poets, whose work will appear in the 2009 Let the Poets Speak anthology, will read at 2:30 p.m. The public is invited to attend this free event.

Doty and Olds readings
My former poetry teacher, Mark Doty, will give a reading Tuesday, October 6, 7 p.m., at Manhattanville College’s Reid Castle, in Purchase, NY; and Sharon Olds will read next door at Purchase College, October 19, 7 p.m., at the Performing Arts Center. Both events are free.

Congratulations to filmmaker Frank Vitale whose movie, “Montreal Main,” is being released in a digitally re-mastered DVD by Sanya Home Entertainment which can be ordered here. See the SkyKid review and interview with Frank, or review excerpts from top journals, museums and film festivals.

Every summer, star-gazers gather on a hilltop in the birthplace of amateur astronomy—Springfield, Vermont. To celebrate this year’s 40th anniversary of the first moon landing, Stellafane organizers invited Alan Bean, Apollo 12 astronaut and fourth person to walk on the moon, to address a full outdoor amphitheater. Bean vividly described his pioneering journey, from the extreme liftoff impact to walking on the moon. Back on earth, he was a changed man—appreciating the Pacific’s rolling blue waves and our planet’s unique pleasures—from unexpected thunderstorms to waiting on line at the post office. Compared to the moon’s stark isolation, he says, earth is “a paradise.” Bean now paints beautiful canvases of his moon experience as an artistic archive. 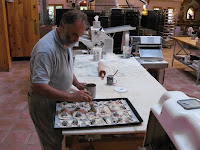 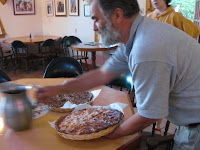 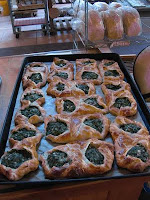 'Round the Net
I am grateful to the following people for these cool links:

· Michael Cefola for this real-time rebroadcast of Apollo 11 air-to-ground transmissions.

· Writer Peggy Harrington for her essay, “What Photographs Tell,” in The East Hampton Star.

· Poet Suzanne Gardinier’s for entry #7 in her video series “America the Beautiful.”

· Artist Angela Virsinger for this artwork for writers:

· Poet E.J. Antonio, for her great news that she is a 2009 fellow in Poetry from the New York Foundation for the Arts.

Hope to see you soon at a poetry reading!

Ann
Posted by annogram at 11:11 PM No comments: