After a three-month hiatus, your annogram is back! Hope you taste spring in the air like I do. We have a lot of catching up to do:

Many thanks to the Hudson Valley Writers Center for inviting me to read December 14. Despite a cold and icy night, the renovated train station in Philipsburg Manor that HVWC calls home had a full house. I was honored to share billing with Greg Delanty, an award-winning poet originally from Ireland who calls Vermont home. I read from my chapbook, Sugaring, and translation, Hence this cradle, and participated in an audience Q&A.
http://writerscenter.org/

The Musculature of Small Birds

My poem, “Aspiration,” appears in The Musculature of Small Birds (shadowbox press, 2007). The chapbook's clever cover is deep blue textured paper, with a manila pocket that holds a library borrower’s card with handwritten title and editor’s name. Buy a copy and 30 percent of your $7 will go to the International Rescue Committee, which aids refugees and displaced people in 25 countries.
http://shadowboxpress.blogspot.com/.

Clapton and Winwood at the Garden 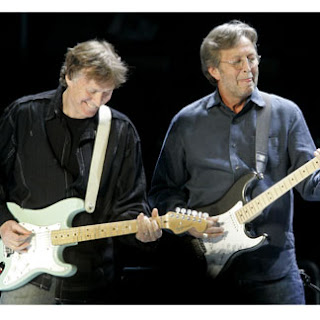 Eric Clapton and Steve Winwood joined forces last week for three sold-out shows. The duo covered memorable songs from Blind Faith, Traffic and Derek and the Dominos, including “Little Wing,” “Can’t Find My Way Home,” and “Dear Mr. Fantasy.” At first tentative, these giants later faced one another and traded blues leads as if in their own studio. Winwood, whose soulful vocals sound like he has a bubble in his throat, performed a powerful “Georgia on My Mind” on organ. Clapton’s solo was an equally impressive version of Robert Johnson’s “Ramblin’ On My Mind.”
http://www.rollingstone.com/rockdaily/index.php/2008/02/26/clapton-and-winwood-break-out-blind-faith-hendrix-at-first-supergig/
Associated Writing Programs Conference
More

than 7,000 writers attended the AWP Conference in New York City in February. I met editors who have published my work, such as Dwayne Hayes of Absinthe, Johannes Göransson of Action Yes, and Stefania Heim and Jennifer Kronovet of Circumference. Other highlights included David Lehman reading his translations of Henri Michaux and CD Wright reciting from Benjamin Alire Saenz’s Dreaming the End of War. Poet Laureate Charles Simic (pictured left), discussing writers’ notebooks, broke up the audience as he intoned “trusting memory is a bad idea.” In another workshop, Beth Ann Fennelly viewed the prose poem as a way “to trap the reader.” Nick Flynn, exploring historical topics, saw such poem-making as an opportunity “to transform obsessive energy into meditative energy.” These nuggets and more abounded during an inspiring—and exhausting—three days.
http://www.awpwriter.org/conference/2008ConfArchive/2008awpco

In January, I caught the Seurat exhibit before it closed. Georges Seurat (1859-1891) would wander around the Zone, a working-class neighborhood between Paris and its suburbs, in pre-dawn and twilight hours. In this unreal light, Seurat’s sketches anticipate his later pointillism with slanted lines raining silhouette figures; other times, textured paper creates the subtle patterns. Women are often a few vanishing lines in the background—and faces, never visible, unless flat and doll-like in his circus posters. The drawings evidence emotion, whereas his vibrant color canvases seem to lack feeling. In these daily sketches, you discover a young man who applied his art scientifically as much as passionately.
http://www.moma.org/exhibitions/2007/seurat/ 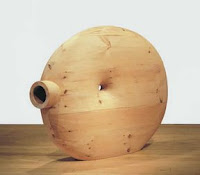 Kudos to MoMA for pairing Puryear (1941- ) with Seurat. After Seurat’s intimate pictures which drew onlookers into tight detail, Puryear’s rolling, round and interwoven wood shapes were a welcome relief. Puryear, craftsman as much as artist, creates unusual tube and globe-like sculptures whose surfaces are oiled like furniture. MoMA wisely left room for people to walk around each one, such as “Deadeye” (2002), which invited exploration by children and adults. Puryear’s work touches on significant themes, such as the riveting “C.F.A.O.” (2007), which speaks to the colonization of Africa and uses a wheelbarrow found in Alexander Calder’s (1898-1976) studio. I really loved this exhibit for Puryear’s ability to evoke the playful, spiritual and political at once.
http://www.moma.org/exhibitions/2007/martinpuryear/flash.html

If you are looking for a noteworthy gift for a writer, consider a hardwood pen from Vermont. I have bought several for friends and kept a lilac wood pen for myself—which, unbelievably, smells like the tree’s blossoms. Contact Jim Cunningham at http://www.moosemaple.com/. 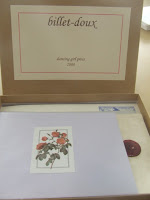 Another gift idea is Billets Doux from Dancing Girl Press. Billets Doux is French for “love letters.” This limited edition collection in an attractive box features 15 love letters, each written and designed by a poet, for $22.
http://dancinggirlpress.blogspot.com/

And, if you're always hungry like me, and happen to live in Westchester: Red Barn Pizza, 158 Central Avenue in Hartsdale (914-328-3927), features whole wheat and multigrain pizza crusts. For the holistically inclined, finding this place is like locating the Holy Grail. I recommend both whole-grain crusts.

Remembering Alice
My mother-in-law, and biggest poetry fan, Alice Cefola, 93, recently passed away. When I won an award from Pulitzer-prize winner John Ashbery, she would get confused and tell people I won the Pulitzer. I’ll never forget Alice’s attentive listening—like she was holding her breath—when Brenda Connor Bey and Linda Simone read their poetry at her nursing home. The Town of Greenburgh’s Poetry Caravan, organized by Sarah Bracey White, made such readings possible—and deeply nourished my extraordinarily appreciative mother-in-law.

Here's to poetry, which endures.

Posted by annogram at 7:31 PM No comments: