Welcome to our new president
What a different world with President Obama taking decisive action on all his campaign promises! Did you know that he is a poet too? Read his poem about his father. Thanks to Lynne Hamill for this discovery. (At left: Senator Obama at a Random House party with my cousin-in-law, Stefanie Sabol).

My poem, “Taped at the Poetry Reading,” appears in Not a Muse (Haven Books, Hong Kong), an anthology about the 21st-century woman. More than 100 poets from 24 countries are featured, including Margaret Atwood, Erica Jong and Sharon Olds. Wish I could attend the publication party in Hong Kong this week!

Perigee
You can also find “Having No Children” at Perigee. The editors selected six poems out of 300, so I am thrilled to be included. More poems will appear in Amoskeag, J Journal and The New Plains Review later this spring. 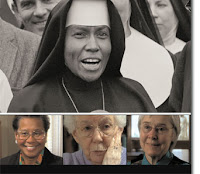 Celebrating African American History Month
Leave it to PBS to complete my education: “The Better Hour,” profiled William Wilberforce (1759-1833), a Member of Parliament who dedicated his life to outlawing slavery throughout the United Kingdom. Another film, “Sisters of Selma,” revealed the role Catholic nuns played in supporting Selma’s black citizens and participating in the 1965 march to the city Courthouse. Two must-see documentaries!

Heavens Above at Rye Arts Center
Thirty amazing Hubble photographs of stars and other celestial objects were on display at The Rye Arts Center January 13-February 21. On the opening night, Westchester Amateur Astronomers hosted a panel featuring Doug Baum, Matt Ganis and Rick Bria who shared breathtaking photos and fascinating insights into astrophotography. Congratulations to Elyse and Larry Faltz on organizing this wonderful event!

Fiction and poetry at Riverspace
Tomorrow, March 1, at 4 p.m., you can hear novelist Hillary Jordan and poet Jeffrey Yang read at Riverspace in Nyack. Jordan's debut novel, Mudbound (Algonquin Books, 2009) was awarded the 2006 Bellwether Prize for literature of social responsibility. Yang’s poetry collection, An Aquarium (Graywolf, 2008) has been widely praised as "spellbindingly wonderful and beautifully fun."

Book reviews
It took me a few years to discover Mindmade Books (formerly Seeing Eye), the chapbook series edited by my Seismicity editor, Guy Bennett. Guy has selected an impressive and diverse collection by authors more than willing to take risks with language. Here are four books I limited myself to—although I wanted to read many more. (Note: Blog format distorts some of the creative line spacing in the following samples.)

In The Row by Guy Bennett, the author explores the twelve-tone “row” created by Viennese composer Anton Webern (1883-1945). One of the hardest things to do in poetry is to impart the senses, and Guy succeeds in communicating the composer’s sound:

With sudden sparks on the violin and one dull gong,

His brittle insistence on color honing our fine breath.

A string of subtle shifts.

And then the author moves from aural description to the composer’s thoughts on his “row”:

my aim: to make
as plain as possible
the relationships between
all parts of the unity.

This is an intelligent and provocative book that made me feel as if I had experienced the composer’s work and had been exposed to its genius.

Eléna Rivera’s Suggestions at Every Turn juxtaposes ordinary quotes and phrases within a series of poems that suggest a narrative of someone at a window:

A photograph of a family
father, mother, brother, sister
ruled around a large round table,
backs straight, faces forward
The voyage was undertaken
with sang-froid on the part of some
and molten lava on the part of others
The great urgency of achievement,
given precedence at the slot machine
while the small sit at a window, looking
at the ocean prairie, thinking of sinking
and of all that was lost.

“Now I am sitting
by the window
looking down.”


The poet uses these creative line breaks and stanzas to add to the mystery—the sense of a definite narrative just out of reach. Rivera references Kafka at one point, and like him, she takes the reader on a rewarding and challenging right-brain journey.

In The Lover’s Numbers, Eleni Sikelianos is both playful and sensual. Like Rivera, she sets aside rational language to draw in the reader. The resulting confusion yields a deeper lyricism and tone suggesting the metaphysical poets, as in “#30”:

alba, luster-white, I grasp & train after
lust I err ever depeopling a night

rushes
dear one
bid sleep’s entrance, receive his right [night’s]
eye so that

to keep us nourished
in the bed’s (indomitable) fury


I would never think of a bed as having “(indomitable) fury”; yet that seems right for a crown of poems about love. Readers will find such abundant and wry surprises throughout The Lover’s Numbers.

Susan Wheeler’s Everything And Below, Below, Below feels like a sad and profound pause in our history. She has taken text from Russell G. Creviston’s Everything and the Kitchen Sink (Farrar, Strauss & Cudahy, 1955), which celebrates the last century’s aggressive and conspicuous consumerism—where Americans are smart, wealthy, educated, creative, etc., etc.

“Below, Below, Below” refers to a 1908 song, “The Mermaid,” that Wheeler intertwines in the Creviston’s work and photos:

[…] the way to get ahead and to
make money is to give the public what it wants in large quantities
and always better or faster or cheaper than their competitors. With
a comb and a glass in her hand.

Scattered throughout, the Mermaid song becomes increasingly refreshing and real in contrast to Creviston’s hyperbole. Maybe the Mermaid is what we've been chasing, and that is the metaphor here. Creviston's fable of American industry is much more exotic. Wheeler is ingenious and timely in what she does—and the book’s poetic truth is more than a little painful right now.

Round the ‘Net
Once again, thanks to the following friends for sending me great links:

· Mary Ladd for this sweet indie short on validation

· Frank Vitale for this Elizabeth Gilbert talk on creativity.


Best birthday wishes to my brother Bill, and until next time!

Ann
Posted by annogram at 10:34 PM No comments: