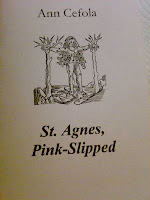 Speaking of which, my new chapbook, St. Agnes, Pink-Slipped, is hot off the press—Kattywompus Press. Thanks to Sammy Greenspan for producing such a beautiful book. When I first opened it, I was awed by the Publisher’s Position Statement on the Value of the Poetry Arts:

This chapbook is a work of fine art from the poet Ann Cefola whose work you support for a few cents per page. You are not buying paper and printer’s ink by weight. You selected language art that took as long to create as paintings for other fine art. On behalf of a large community of contemporary poets, this poet in particular, independent and small press publishing, and Kattywompus Press, thank you for supporting this project.

Isn’t that amazing? For more on Sammy Greenspan’s take on the state of the art, including book publishing, see this thoughtful interview at Meet the Press in Best American Poetry's blog series.

Jacar Press has accepted my poem, “Having No Children,” for its love anthology and Alimentum will publish my poem, “Nocturnal,” in winter 2012. And WomenArts Quarterly Journal has accepted Beth Gersh-Nesic’s interview with me, on the transformative effects of translation, for an upcoming issue.

Carr for suggesting that I offer a summer reading list. I have been plowing through, delightedly, fiction and novel Pulitzer Prize winners. My favorites to date have been March by Geraldine Brooks and Tinkers by Paul Harding. Dipping into Pulitzer history, I was blown away by The Grapes of Wrath and The Yearling—books as informative about the Depression as any Walker Evans photo. If you’re unsure about what it means to be American, these books speak a plain if painful truth.

What a pleasure to see Deborah Coulter’s work at the Pelham Art Center! Evoking Warhol and Dine, Deborah’s collage on board, “Song of Love and Peace,” is mesmerizing with all its whimsical images. Her charcoal on paper, “The Space Between (Triptych),” is equally intriguing with its wave-like movement. You can see these works now through August 13.

Jackie will be at

Cornelia Street Café tomorrow night, Monday, July 18 at 6 p.m., as feature poet. On July 25, you can find her doing a benefit in Oceanside, Long Island, at 7 p.m. On August 13, she will be performing around 7:30 p.m. at the Dissident Arts Festival at the Brecht Forum, 451 West Street between Bank and Bethune; and back at the Cornelia Street Café on August 22 at 6 p.m. Whew! Hard to keep up with her—and that’s not even including all her September dates.

To end on an uplifting note: After a deliberately set fire destroyed the town’s one movie theatre in 2008, Springfield (VT) began to rebuild the block-length building. Springfield had just won the contest which proclaimed it Homer Simpson’s hometown. Its small cinema, the only one around for miles, provided a focal point for the economically struggling town. This past Friday night, however, the theater reopened with a midnight showing of the latest Harry Potter film. An excited line of movie goers stretched into the street an hour ahead of time.

Springfield’s other claim to fame? The birthplace of amateur astronomy, and host to Stellafane, a yearly convention of amateur telescope makers from around the world. Ah, but that is another story! Stories nourish us—in film, books or through telescopes

Wishing you breath-taking ones,

Posted by annogram at 5:35 PM No comments: