Dear annogrammers, Welcome back! Am I really seeing some leaves falling? Is there a touch of coolness in the air at night? Summer, ah summer! Hope yours was good. Here I am investigating a pilotless plane in Vermont.

Thanks to Lou Spirito, author of Gimme Shelter, who generously wrote and posted this review of my Trainwreck Press chapbook on Facebook earlier this summer:

Just finished Ann Cefola's brilliant chapbook, When The Pilotless Plane Arrives. Each of the 20 poems makes a sly, if oblique connection between the poet's craft and B movies (okay, some are C or D cult movies) from the 1930s-70s. Yes, you have to work a bit to suss out the connections, but that's the fun of it. Thank God for writers with whimsy and the nerve to trust their readers.

My secret source for those films: Svengoolie, leading Saturday night ratings, as reported in the Wall Street Journal and kindly shared by sci-fi aficionado Bill Newell. What hooked me was the quality of acting, solid storylines, and delightfully cheesy effects; many films etched into our cultural psyche, such as The Day the Earth Stood Still. Host Rich Koz as Svengoolie adds wicked hilarity. If you love these films, you will enjoy both Svengoolie and When The Pilotless Plane Arrives.

To Be or Knott to Be

Bill Knott (1940-2014) has to be one of the pristine, remarkable poets of the past half-century. How to describe him? The economy of Emily Dickinson, bite of Philip Larkin, facility of Shakespeare. Thanks to his lifelong friend Thomas Lux (1946-2017) and literary executor, poet Robert Fanning, we can enjoy a fresh look at his work in I Am Flying Into Myself (Farrar, Straus and Giroux) and a new translation in Italian, introduced by Charles Simic, Volarsi Dentro (Italic Pequod).

I go away for a month or two, and look what happens...poet Kerrin McCadden receives the Herb Lockwood Prize in the Arts, Vermont’s biggest arts award. Christina Rau gets named Cedarmere Poet in Residence. Filmmaker Frank Vitale gets honored at the Garner Art Center for achievement in film. And translators Chen Du and Xisheng Chen get nominated for a 2023 Best of the Net Award for a Yan An poem in The Ilanot Review. Troublemakers! Keep working your magic.

The global phenom, ModPo, or Modern and Contemporary American Poetry, an open online course, will celebrate its 10th anniversary with a webcast September 11 at 11am, and a reading and launch for The Difference is Spreading (University of Pennsylvania Press) by ModPo founder Al Filreis and Anna Strong Safford. I am proud to be a ModPo graduate, and when a friend assumed it was easy, my immediate answer was “Hell no!” This is serious Ivy League brain-crunching, highly recommended.

Presence: A Journal of Catholic Poetry, by October 30

Pure Slush call for stories, essays, and poems on “snatches from an aria,” by September 30

Women in Their 80s, octogenarian poetry and prose anthology; detaylor@cabrillo.edu, by September 30

Margaret A. Herrick and Barbara J. Dickinson, Your Path to a Fulfilling Life: Making Your Wishes Come True (Independently published), new in paperback 
The Poets Salon led by Ed Ahern and Alison McBain of Fairfield Scribes Press, 10am, every second Saturday

September 17, 10am-4pm, Good Contrivance Farm, Kimiko Hahn workshop, The Zuihitsu: What is This Genre and How to Write One; 6pm craft talk, Closure is Not the End; $200; register for this in-person event here

This delicious annogram-tested recipe comes to us via King Arthur Flour. I substituted maple syrup for honey, and used Nestlé’s Dark Chocolate Chips which have no soy. Rave reviews on the KAF site merited!

Essayist, filmmaker, and artist Jeanette Briggs on finding this interview with Sylvia Beach (1887-1962)

Wish maven and author Barbara Dickinson on the launch of her new blog, The Pipeline

Translators Chen Du and Xisheng Chen for poems by Yan An in DoubleSpeak, Family (The Poet Magazine), Mantis, and Sand; and a short story by Feng Jiqui in Delos

Art historian and translator Beth S. Gersh-Nesic for participating in the PEN live “get well” greeting to Salmon Rushdie

Poet Cindy Hochman on having her poem, “What the Sun Said Today,” in The Long Islander

Poet Hiram Larew on having a poem translated into American Sign Language (ASL), and translator Eric Epstein discussing the process


Poet and painter Meg Lindsay on having work in a juried show at Gallery A3 last month, and for sharing The Journal of Universal Rejection

Yorktown Poet Laureate John McMullen on having a poem in the Brownstone Poets Anthology 2022; Joseph Carrabis’s interview with John; this article, “What is Poetry?” and this interesting electronic notebook you can write on

Poet and novelist Kevin Pilkington on having 12 poems translated into Russian, and for his online reading this summer via the American Center in Moscow

Music archivist, producer, and cellist Jay Shulman for the “best Beatle performance ever”

Poet and watercolorist Linda Simone for this video game that creates Emily Dickinson-inspired poems and for Artle, “Wordle” for paintings

Filmmaker and author Bob Zaslow for his American Film Institute award-winning documentary, Nadine Valenti: Portrait of a Painter (1976), collected at the Metropolitan Museum of Art and NYC Z Public Library

Only This One Thing 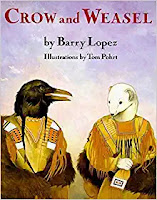 In Crow and Weasel, a picture book by Barry Lopez, the two animals journey together and stop at an old badger’s home. They enjoy good food and share stories of their journey. A wonderful listener, the badger coaches them as they tell the story, asking for more feeling or details. The next morning, as he wishes them farewell, he says

I would ask you to remember only this one thing: The stories people tell have a way of taking care of them. If stories come to you, care for them. And learn to give them away where they are needed. Sometimes a person needs a story more than food to stay alive. That is why we put these stories in each other’s memory. This is how people care for themselves.

Posted by annogram at 7:13 PM No comments: