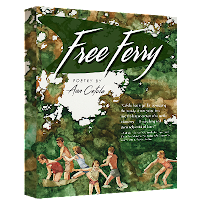 Thanks to reviewer Darrell Laurant for featuring Free Ferry today on his blog, Snowflakes in a Blizzard. Discover the backstory behind Free Ferry if you’ve read it. And if not, now is the perfect time: Free Ferry is at a discounted price of $7. Read it to see astonishing similarities of our current geopolitical climate with the 1960s.

The Enchantment of the Ordinary

Mutabilis Press has accepted my poem, “Kin”, a salute to the time I first met my lovely Texas and Oklahoma relatives, for a Texas-themed anthology, The Enchantment of the Ordinary. Big hugs to my cousin Katherine in Fort Worth who knew all the relatives named! My dear friend Linda Simone, a San Antonian, has a poem included too, and we can’t wait for the book’s debut this fall.

The Hero forthcoming from Chax

So excited my translation of Hélène Sanguinetti’s The Hero will debut soon from Chax Press! The publisher, Charles Alexander, a poet and book designer, takes the utmost care in producing fine books. Poet and translator Cole Swensen has also praised the book in a generous inscription. Get ready to read a seriously audacious work from one of France’s top contemporary poets!

Lydia Davis at the Albertine

How great to meet Lydia Davis at the Albertine Prize program last month! Ms. Davis, award-winning micro-fiction writer and Swann’s Way (Penguin, 2004) translator, is now translating from Dutch. She told me she read all of Proust’s correspondence for Letters to His Neighbors (New Directions, 2017), and that this edition corrects prior timeline errors. Thanks to Beth Gersh-Nešić, art historian and André Salmon translator, for inviting me to this wonderful event!

My friend, and an excellent coach, Rona Carr likes me to recommend summer reading. Look no further than Upper Hand Press, whose books are $7 now. Discerning readers I know were moved by 100 Years of Marriage, a sleeper classic; Saving Phoebe Murrow, winner of the 2018 Indie Novel of the Year; and Elizabeth Primamore’s Shady Women. Why not complete some holiday shopping now?

Members exiting Stamford’s First Congregational Church have quite a view—the backside of a 30,000-lb, 26-foot-tall Marilyn Monroe. The Seward Johnson statue, in Lapham Park for the summer, captures Ms. Monroe’s iconic The Seven-Year-Itch pose, where her billowy dress blew upwards over a New York subway grate. Both awe-inspiring and creepy, it recalls Attack of the 50-Foot Woman, “Harry… Harry….”


What a joy to hear J. Chester Johnson at St. James the Less on Auden, the Psalms and Me (Church Publishing, 2017). It’s a book you feel compelled to read in one sitting, so fascinating is the “religious” Auden never discussed in contemporary literature. Auden’s letters cast a lasting influence over Chester’s life as a poet and translator, and important considerations for the rest of us.

Karen George, A Map and One Year (Dos Madres Press)

Poetry, essay, drama, or hybrid on Simone Weil (Word, RTF, or PDF) with author info to weilanthology@gmail.com by August 1 for Orison anthology

Again, from George Motz’s The Great American Burger (Abrams, 2016): Halve ingredients if only serving two or three people, and use a bag of shredded cabbage for a stupid-fast slaw.

Combine cabbage and carrots in bowl and set aside. In large bowl, whisk together mayo, vinegar, mustard, salt and pepper. Add carrots and cabbage, tossing to coat. Cover and refrigerate for an hour before serving, or up to 24 hours.

And, as promised from the last annogram, toppings for the beet burger recipe:

Melt butter in a saucepan over medium heat and add mushrooms. Cover and cook until mushrooms release their liquid. Pour in the wine and raise the heat to high. When liquid in pan is reduced, remove from heat. Salt to taste and set aside until ready to use on your beet burgers. 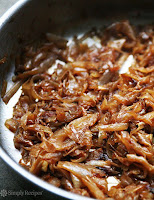 Preheat skillet over medium heat and add olive oil. Slice onions into thin rings or strings and add to skillet, stirring to coat with oil and continuing to poke, pat and move around until onions become limp, about 6 minutes. Add salt and stir. Add wine and raise heat for 1 minute, stirring constantly until liquid evaporates, then return to medium heat and add butter, stirring until melted. Cook, turning onions in pan frequently for another 10 minutes or until nicely golden brown and caramelized. Remove from heat and set aside.

See prior annogram for beet burger recipe: While burgers still brown in the pan, add spoonful of sautéed mushrooms to top of each followed by a cheddar cheese slice. Cover, cook until the cheese melts, about 2 minutes. Transfer beet burgers to toasted buns and top with caramelized onions.

Duc Le for sharing the Poetry Journal in Print, a journal of Vietnamese and English poetry

The New York Public Library for its July Staff Picks

Poet Linda Simone on reading next month at San Antonio 300, her poem “Whisk” in the San Antonio-Express News, and essay in Far Villages: Essays for New Beginner Poets forthcoming from Black Lawrence Press

Songwriter and singer Fran Sisco on her new film, Happy Trans Girl Like Me

Wishing everyone a summer full of rest and recreation so necessary for creativity!  See you back here in September….

Until next time,
Ann
Posted by annogram at 11:14 AM No comments: